The Internet is full of good articles that explain the theory behind the Hidden Markov Model (HMM) well (e.g. 1, 2, 3 and 4) . However, many of these works contain a fair amount of rather advanced mathematical equations. While equations are necessary if one wants to explain the theory, we decided to take it to the next level and create a gentle step by step practical implementation to complement the good work of others.

In this short series of two articles, we will focus on translating all of the complicated mathematics into code. Our starting point is the document written by Mark Stamp. We will use this paper to define our code (this article) and then use a somewhat peculiar example of “Morning Insanity” to demonstrate its performance in practice.

Before we begin, let’s revisit the notation we will be using. By the way, don’t worry if some of that is unclear to you. We will hold your hand.

Having that set defined, we can calculate the probability of any state and observation using the matrices:

The probabilities associated with transition and observation (emission) are:

The model is therefore defined as a collection: .

Since HMM is based on probability vectors and matrices, let’s first define objects that will represent the fundamental concepts. To be useful, the objects must reflect on certain properties. For example, all elements of a probability vector must be numbers and they must sum up to 1. Therefore, let’s design the objects the way they will inherently safeguard the mathematical properties.

The most natural way to initialize this object is to use a dictionary as it associates values with unique keys. Dictionaries, unfortunately, do not provide any assertion mechanisms that put any constraints on the values. Consequently, we build our custom ProbabilityVector object to ensure that our values behave correctly. Most importantly, we enforce the following:

Having ensured that, we also provide two alternative ways to instantiate ProbabilityVector objects (decorated with @classmethod).

For convenience and debugging, we provide two additional methods for requesting the values. Decorated with @property, they return the content of the PV object as a dictionary or a pandas dataframe.

The PV objects need to satisfy the following mathematical operations (for the purpose of constructing of HMM):

Note that when e.g. multiplying a PV with a scalar, the returned structure is a resulting numpy array, not another PV. This is because multiplying by anything other than 1 would violate the integrity of the PV itself.

Internally, the values are stored as a numpy array of size .

Another object is a Probability Matrix, which is a core part of the HMM definition. Formally, the and matrices must be row-stochastic, meaning that the values of every row must sum up to 1. We can, therefore, define our PM by stacking several PV’s, which we have constructed in a way to guarantee this constraint.

Here, the way we instantiate PM’s is by supplying a dictionary of PV’s to the constructor of the class. By doing this, we not only ensure that every row of PM is stochastic, but also supply the names for every observable.

Mathematically, the PM is a matrix:

The other methods are implemented in similar way to PV.

Before we proceed with calculating the score, let’s use our PV and PM definitions to implement the Hidden Markov Chain.

Again, we will do so as a class, calling it HiddenMarkovChain. It will collate at , and . Later on, we will implement more methods that are applicable to this class.

Computing the score means to find what is the probability of a particular chain of observations given our (known) model . In other words, we are interested in finding .

We can find by marginalizing all possible chains of the hidden variables , where :

This is a naive way of computing of the score, since we need to calculate the probability for every possible chain . Either way, let’s implement it in python:

If our implementation is correct, then all score values for all possible observation chains, for a given model should add up to one. Namely:

Computing the score the way we did above is kind of naive. In order to find the number for a particular observation chain , we have to compute the score for all possble latent variable sequences . That requries multiplications, which even for small numbers takes time.

Another way to do it is to calculate partial observations of a sequence up to time .

Note that is a vector of lenght . The sum of the product can, in fact, be written as a dot product. Therefore:

where by we denote an element-wise multiplication.

With this implementation, we reduce the number of multiplication to and can take advantage of vectorization.

Let’s test one more thing. Basically, let’s take our and use it to generate a sequence of random observables, starting from some initial state probability .

If the desired length is “large enough”, we would expect that the system to converge on a sequence that, on average, gives the same number of events as we would expect from and matrices directly. In other words, the transition and the emission matrices “decide”, with a certain probability, what the next state will be and what observation we will get, for every step, respectively. Therefore, what may initially look like random events, on average should reflect the coefficients of the matrices themselves. Let’s check that as well.

An example of a Markov process. The states and the observable sequences are shown.

The state matrix is given by the following coefficients:

Consequently, the probability of “being” in the state at , regardless of the previous state, is equal to:

If we assume that the prior probabilities of being at some state at are totally random, then and , which after renormalizing give 0.55 and 0.45, respectively.

If we cound the number of occurences of each state and divide it by the number of elements in our sequence, we would get closer and closer to these number as the lenght of the sequence grows.

Convergence of the probabilities against the length of the chain.

Let’s take our HiddenMarkovChain class to the next level and supplement it with more methods. The methods will help us to discover the most probable sequence of hidden variables behind the observation sequence.

We have defined to be the probability of partial observation of the sequence up to time .

Now, let’s define the “opposite” probability. Namely, the probability of observing the sequence from down to .

For and , we define:

As before, we can calulate recursively:

which in vectorized form, will be:

Finally, we also define a new quantity to indicate the state at time , for which the probability (calculated forwards and backwards) is the maximum:

Consequently, for any step , the state of the maximum likelihood can be found using:

To validate, let’s generate some observable sequence . For that, we can use our model’s .run method. Then, we will use the .uncover method to find the most likely latent variable sequence.

As we can see, the most likely latent state chain (according to the algorithm) is not the same as the one that actually caused the observations. This is to be expected. Afterall, each observation sequence can only be manifested with certain probability, dependent on the latent sequence.

The code below, evaluates the likelihood of different latent sequences resulting in our observation sequence.

The time has come to show the training procedure. Formally, we are interested in finding such that given a desired observation sequence , our model would give the best fit.

Here, our starting point will be the HiddenMarkovModel_Uncover that we have defined earlier. We will add new methods to train it.

Knowing our latent states and possible observation states , we automatically know the sizes of the matrices and , hence and . However, we need to determine and .

is the probability of transitioning . Writing it in terms of , we have:

Now, thinking in terms of implementation, we want to avoid looping over and at the same time, as it’s gonna be deadly slow. Fortunately, for every , we can vectorize the equation (preserving that are indexed with i while are indexed with ).

Having the equation for , we can calulate

Having the “layer” supplemented with the ._difammas method, we should be able to perform all the necessary calculations. However, it makes sense to delegate the “management” of the layer to another class. In fact, the model training can be summarized as follows: 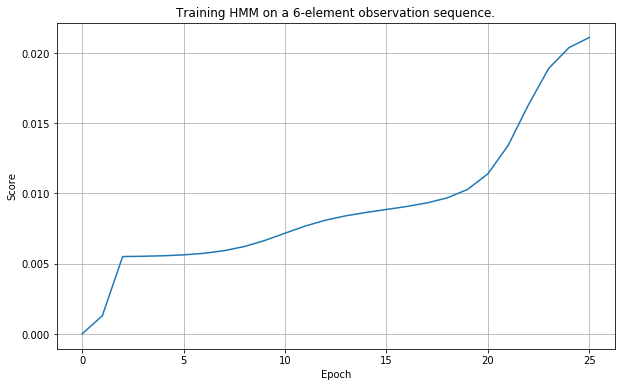 Example of the score funciton during training.

Let’s look at the generated sequences. The “demanded” sequence is:

The table below summarizes simulated runs based on 100000 attempts (see above), with the frequency of occurrence and number of matching observations.

The bottom line is that if we have truly trained the model, we should see a strong tendency for it to generate us sequences that resemble the one we require. Let’s see if it happens.

And here are the sequences that we don’t want the model to create.

As we can see, there is a tendency for our model to generate sequences that resemble the one we require, although the exact one (the one that matchs 6/6) places itself already at the 10th position! On the other hand, according to the table, the top 10 sequencies are still the ones that are somewhat similar to the one we request.

To ultimately verify the quality of our model, let’s plot the outcomes together with the frequency of occrence and compare it agains a freshly initialized model, which is supposed to give us completely random sequences - just to compare.

Result after training of the model. The dotted lines represent the matched sequences. The lines represent the frequency of occurrence for a particular sequence: trained model (red) and freshly initialized (black). The initialized results in almost perfect uniform distribution of sequences, while the trained model gives a strong preference towards the observable sequence.

It seems we have successfully implemented the training procedure. If we look at the curves, the initialized-only model generates observation sequences with almost equal probability. It’s completely random. However, the trained model gives sequences that are highly similar to the one we desire with much higher frequency. Despite the genuine sequence gets created in only 2% of total runs, the other similar sequences get generated approximately as often.

In this article, we have presented a step-by-step implementation of the Hidden Markov Model. We have created the code by adapting the first principles approach. More specifically, we have shown how the probabilistic concepts that are expressed through eqiations can be implemented as objects and methods. Finally, we demonstrated the usage of the model with finding the score, uncovering of the latent variable chain and applied the training procedure.

Do you want more?