In this post, we will take a look at a few cases, where KMC algorithm does not perform well or may produce unintuitive results. In particular, we will look at the following scenarios:

All of these conditions can lead to problems with K-Means, so let’s have a look.

To make it easier, let’s define a helper function compare, which will create and solve the clustering problem for us and then compare the results.

Despite having distinct clusters in the data, we underestimated their number. As a consequence, some disjoint groups of data are forced to fit into one larger cluster.

In contrary to the last situation, trying to wrap the data into too many clusters creates artificial boundaries within real data clusters.

A dataset does not need to be that high in dimentionality before we begin to see problems. Although visualization and thus somewhat analysis of high dimensional data is already challenging (cursing now…), as KMC is often used to gain insight into the data, it does not help to be presented with ambiguities.

To explain the point, let’s generate a three-dimensional dataset with clearly distinct clusters. 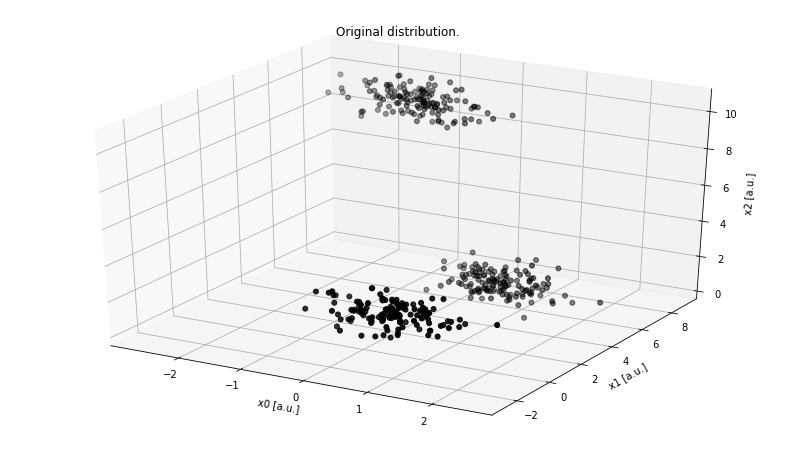 Example of a 3-dimensional dataset with 3 centers.

Although there are infinitely many ways we can project this 3D dataset onto 2D, there are three primary orthogonal sub-spaces:

Looking at the x2 : x0 projection, the dataset looks like as if it only had two clusters. The lower-right “supercluster” is, in fact, two distinct groups and even if we guess K right (K = 3), it looks like an apparent error, despite the clusters are very localized.

To be sure, we have to look at the remaining projections to see the problem, literally, from different angles.

On the flip side, we had an incredible advantage. First, with three dimensions, we were able to plot the entire dataset. Secondly, the clusters that exist within the dataset were very distinct thus easy to spot. Finally, with three-dimensional dataset, we were facing only three standard 2D projections.

The case of N, N > 3 features, we would not be able to plot the whole dataset, and the number of 2D projections would scale quadratically with N:

not to mention that the dataset may have strangely shaped or non-localized clusters, which is our next challenge.

So far we mentioned problems that are on “our side”. We looked at a very “well-behaved” dataset and discussed issues on the analytics side. However, what about if the dataset does not fit our solution, or, our solution does not fit the problem? This is exactly the case, where data distribution comes in strange or irregular shapes.

Being presented with just this graph, we may be tricked into believing that there are only two clusters in the data. However, when plotting the remaining projections, we quickly learn that this is not true.

In either case, the irregularity makes KMC algorithm underperform. Since the algorithm treats every data point equally and completely independently from other points, the algorithm fails to spot any possible continuity or local variations within a cluster. What it does is simply taking the same metrics and applying it to every point. As a result, the KMC algorithm may produce strange or counter-intuitive clustering within the data even if we guess K correctly and the features N are not that many.

In this post, we have discussed three main reasons for the K-Means Clustering algorithm to give us wrong answers.

Knowing these three fallacies, KMC is still a useful tool, especially when inspecting of the data or constructing labels.