The Fish Light project is the artificial illumination system intended to imitate color of the sky. This project was inspired by the combination of the Norwegian winter darkness and having an aquarium. The idea was to control the aquarium lamp and at the same time give a natural color to the surroundings, which could imitate the color of the sky throughout the day. The project evolved and it’s final effect is an artistic installation that is placed next to the aquarium in the main room. In this note, I would like to show you that building such thing can be really simple. 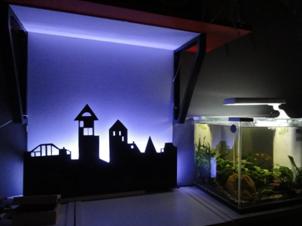 There are several features that I wanted this lamp to possess.

From the design point of view, the system was given four buttons. One to select between the automatic and the manual mode, second to switch between the colors (manual mode) and two to increase/decrease the intensity a particular channel (R, G, B or the lamp). 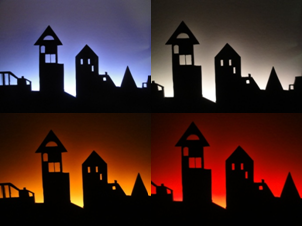 Colors during different times of the day.

How is it done?

The device was built using ATmega88 microcontroller and Atmel Studio 6 to program the chip. Later, I tested it using STK600 testing board and a RGB LED strip.

Why going the hard way?

Using of a bare-bone microcontroller is definitely an overkill for a project of this size. I could have just as well used Arduino. However, this was not the point. I wanted to do all the steps completely by myself, just to enjoy doing multiple things.